The hydrologic interregnum appears to be over, and just in time:

Groundhog day is an important milestone “up north:”
It's the mathematical halfway point between the winter solstice and the spring equinox, and while meteorologically still in the heart of winter, it is also the metaphorically gateway for leaping ahead to the spring thaw and bloom that beckons in the weeks to come. 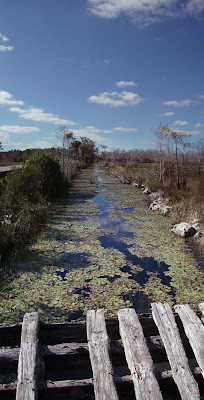 If the Groundhog sees his shadow, 6 more weeks of winter are at hand … so the legend goes.
If it’s cloudy and he doesn’t, an early spring is on the way.


For us here in sunny south Florida, the Groundhog most always sees his shadow.

Our rendition of Groundhogs Day can loosely be interpreted as an indication that we have 6 more weeks of delightfully mild “dry season” weather ahead. Those 6 weeks takes us pretty much up to the middle of March, after which the “scorching” final third of the dry season begins.
The term “scorching” has a double meaning here: both

(1) The unrelenting heat of a cloudless Florida sky and
(2) The onset of peak wildfire season due to the absence of water.

But that’s thinking ahead. 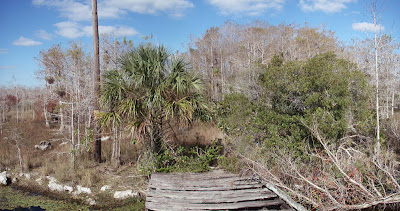 In front of us now is the waning days of the hydrologic interregnum.

What is the hydrologic interregnum you may ask?

It’s just a fancy way of saying winter dry down.

It’s the hydrologic transition when the outgoing wet season – the “lame duck” – has lost its primary contributor – the summer rains – but when the ground is still wet (or mostly wet).

The wet season ended 15 weeks ago, in mid October.

Since then we’ve seen nary a cloud and hardly any rain, but the wet season’s surface water was still with us – and in plain sight – until the start of the new year.

That’s no longer the case:

The pinelands, prairies, and most of the cypress are dry.

The water is still out there to be sure.

You just have to go hunting deep into the swamps to find it.

The hydrologic interregnum is still active in two of our wetland habitats: the fringes of the tall cypress and in the liquid heart of our swamp forest.

But even those won’t hold water for much longer if we don’t get some rain soon. 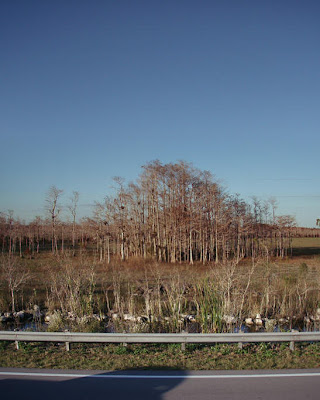 If and when we get those dry season rains is anyone’s guess:

Let's wait until Monday and watch for the Groundhog's shadow first.
It's a pretty good bet we'll see it here in sunny Florida!

Click here to view more SkyWatch images from around the world.
By Unknown at Wednesday, January 28, 2009

Email ThisBlogThis!Share to TwitterShare to FacebookShare to Pinterest
Labels: Rain Or Shine Report

A very interesting and informative post. Living on the other side of the world posts like this is a welcome addition to the lacking common knowledge one has about the places in the world. I never knew you suffered from such drought even this early in the year. Here's wishing the groundhog shadow will deliver its promise.

Interesting, Bob. Being in the middle (sorta) of the country, we listen carefully to the Groundhog --and I cannot think of a year (I'm sure there were some) when we DIDN'T have 6 more weeks of winter..

Our rainy seasons are usually winter/spring--and summer here is usually dryer. Of course, with our drought the past couple of years--who knows about the future????

You never have blogged about Global Warming. I'd love to hear your thoughts sometime.
Betsy

Thanks for another informative post. Even if you do see the groundhog's shadow on Monday, I hope you'll get some rain.

I never paid attention to the Groundhog's shadow. Spring arrives when it's ready. Here in Charlotte, Spring starts blooming by the 1st of March whether the Groundhog sees its shadow or not.

I hope your rainy season starts soon. Too dry is not good. But I know Florida rain will always come.

BTW - we are emerging from our drought (I think...)

Interesting information and blog. I'll have to bookmark it to check back. I toyed with becoming a marine biologist for a while in school, so it is nice to keep up with the environmental side of Florida. Now I need to find someone in west Florida since you've got the south and Pure Florida has the north-central regions covered for me. :)

Thanks for stopping by my blog. You are welcome any time. :)

Thanks for your thoughts in my doggy blog. We often cover a lot of ground during our rambles in the woods and along the shore line.
However I don't think friendship was on the agenda between the cygnet and the dogs.

Very interesting to learn about Florida's water cycle. Sure hope it rains and keeps the fires down this summer.

No groundhog could dig it's way out of the snow drifts we have around here at the moment. Unless somebody comes by with a flamethrower in the next few days, I don't hold out much hope...

Always enjoy your very informative posts along with your beautiful photos. We've had such a strange winter for Washington and I have no idea what at this point just what the groundhog would see here! Thanks for stopping by and for your comments, as always. Have a good weekend!

Thanks for the lesson and tour. I like your version of Groundhog Day.

Thanks for your comments.

Monday will be the big moment of truth. We'll have our fingers crossed down here in Florida that the Groundhog's shadow goes unseen.

Florida's true Groundhog Day is Labor Day: it's the onset of Fall for everyone up on the continent, but just a reminder that we have 6 more weeks of summer (and hurricane watch).

That groundhog is gonna see his shadow if I have to stand out beside his burrow with a flashlight!

Very interesting post and lots of wonderful information. Being up here in the north freezing it's startling frequently when I talk to my best friend down there in Florida and she's enjoying the sun and warmth. Even within our own country such extreme.

Wow, thanks for the informative post...Very beautiful sky. Happy skywatching!

I can't begin to follow all of the science (some of it, but not nearly all).

But I know a cool photo when I see one.

Very informative and thanks for explaining those complex terminologies. Nice shots!

Looks like today is the day for rain for central Florida... stay warm as the temps dip.

Lovely blue skies in your shot, there.

Very interesting. As you probably know, we here in Cal. are longing for more rain; we have a terrible drought right now. Nice shots!

Thanks for you comments.

That's a good point about the Groundhog: we get so focused on the question of whether the shadow will appear or not we lose track of the larger question -- does it matter either way?

I've found that there is always a nugget of truth behind every wise tale, or a reason why it came to life to begin with.

In the case of the Groundhog, it marks the halfway point between celestial winter and spring. What's the saying about making it over the hump on Wednesday? That makes Groundhog Day the hump day for the long winter season.

Hopefully it's downhill from here for everyone up north.

Don't be so sure about it being downhill, Robert. Here (near Detroit) we are expecting another snowstorm middle of next week. *sigh* I don't think the groundhog has any interest in being outside here!

Interesting post and beautiful pictures. I'm hoping for an early Spring; yesterday we had a small taste of it when the temperature soared to a balmy +10C! Very unusual. Thanks for your comment on my Sky Watch.

Always interesting and informative with great shots for the eyes.
:-)